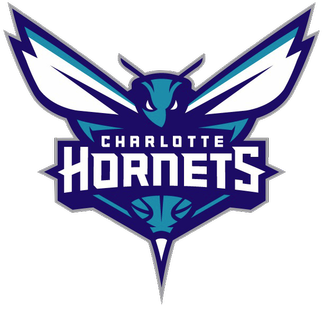 Ask yourself out of 43 home games (2 preseason & 41 regular season)
How many will you be going to?
The wife and I will be going to 8 games for sure and possibly one more.

How much are you willing to spend for tickets?
A Lot. After selling the nights I didn't go and getting back the money I paid upfront I spent $3730 to go to 8 games in a premium area and have season ticket holder benefits.

UPDATE 12/22/2016
After selling 34 games I was not going to the average price per pair of tickets was $140.46. As a season ticket holder I paid $198 per pair of tickets. Keep in mind that I went to most of the games where the stars came to town. If I would have sold a few nights from the big games I may have been able to get very close to paying for my entire season. View my 2 blogs detailing the selling of my nights I didn't go to better understand the pros and cons of selling your unused seats.


UPDATE 4/21/2017
The season is over and here is a copy of my tickets sold spreadsheet detailing the cost of season seats down to the penny.

The Truth About Selling Season Seats The Nights You Can't Go

Where will you stay over night, or will you be traveling back home?
I live 4.5 hours away from Charlotte and will be staying the night for every game we go to. I got a Holiday Inn credit card that I get points towards cheap hotel stays. There is a nice updated Holiday Inn right across the street from the arena. By using the credit card for things that I would usually pay cash for and putting the cash right back on the card I have used points to bring down $200+ a night stays down to $99 + 15000 points a night stays in a King suite every time I stay over night for a game.With different promotions and points from purchases I have every game night booked on the cheap already.

Where will you park?
I'll be parking at the hotel. The Holiday Inn that we will be going to every game has valet parking for $25 a night. Not great but who wants to run around looking for parking on game day.

UPDATE 1/9/2017
There are loads of parking decks near the arena that will cost you from around $10 - $25. You can use a parking locator site like Park Whiz to find out where all the parking decks and lots are. While I haven't done it many of the restaurants that people go to after the games advertise that they validate parking for certain decks / lots.

If you stay overnight what will you eat?
We are foodies and we will be sampling all that Charlotte has to offer.

UPDATE 1/9/2017
After spending a few months going to games I can say that there are a multitude of places to eat within walking distance of the arena. Places ranging from McDonald's to high end steak houses. Hit Google or Yelp and find something good to eat. I recommend trying out Mert's Heart and Soul - Soul Food Restaurant.

Will you be eating expensive arena food?
Arena food is expensive and most time we get bottles of water (around $8) and maybe a popcorn (around $10). Below is a copy of a receipt from a Hornets game were 2 hotdogs, 2 fries, and 2 drinks cost me near $40.

All the questions I just asked are going to cost you money on top of what you are already paying for your season tickets.

Here is a REAL WORLD account of what my wife and I are doing as 1st year season ticket holders who live out of town.

You can look online and see where all the sections and seats are located, as well as how much each seat will cost you a game for a season membership. In my case I chose High Club seats at $95 a seat per game. High Club seats for the 2016/2017 season cost around $8457 for two seats for the season.

This is a copy of the first receipt I received after selecting seats and paying over the phone. You can also set up season tickets using the Hornets website.


Season seats can be broken down into a 9 month payment plan that comes out automatically on the 16th of every month if you don't pay manually before the 16th. My payment broke down to around $940 a month for 9 months (May - January). 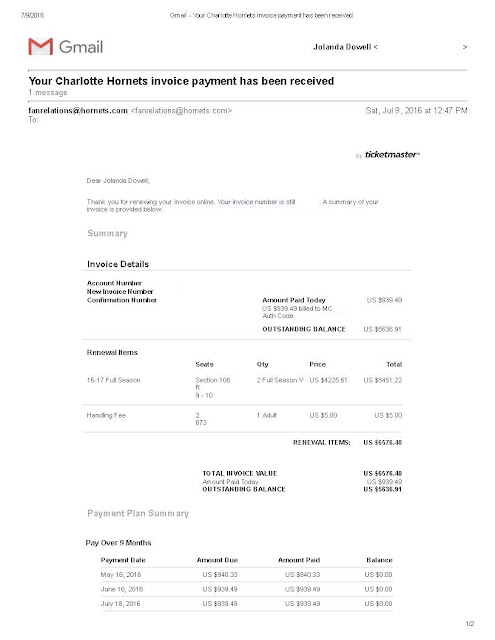 After I got my seats I was assigned an account manager. An account manager is the person who you can contact about anything and everything concerning your membership. The account manager sends you emails or calls you every now and again to invite you to season ticket holder events like a meet and greet with a few Hornets players. Or the account manager will contact you about better seat opportunities if you request it. I personally feel I have a good account manager (Wade Davenport). Wade gets me the info I ask for quickly and doesn't bug me with nonsense.

This is where I'm at now. I'm paying and waiting for the season to start. I'll be updating and giving more info as the season goes on.

UPDATE
10/7/2016
The Season Ticket Holder Package Came Yesterday. Season ticket holders get a package like this a few weeks before the start of the season. 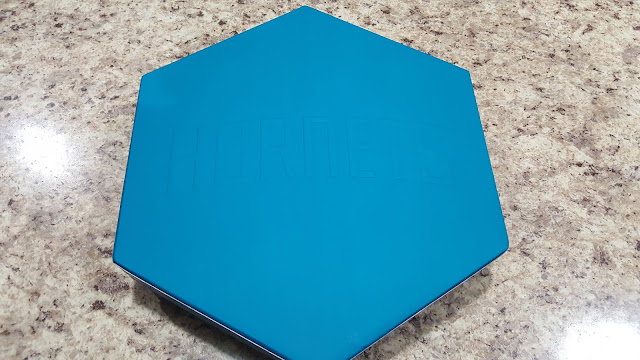 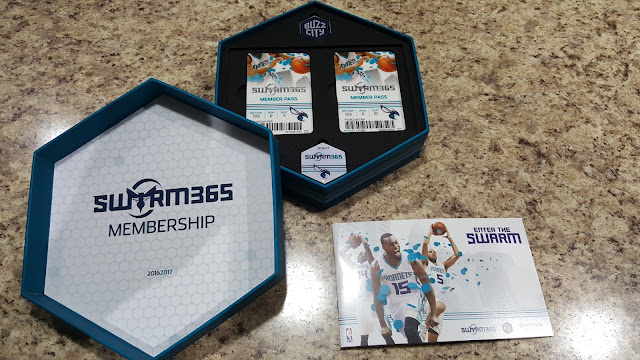 There are two credit cards with all our tickets for the games loaded up on them, two magnetic Hornets pins and a season booklet with instruction on how to do game trading.

UPDATE
10/29/2016
I was able to see first hand what a good account manager does for you. We got to the arena and I got a text from our account manager asking if we would like to sit court side for the home opener. 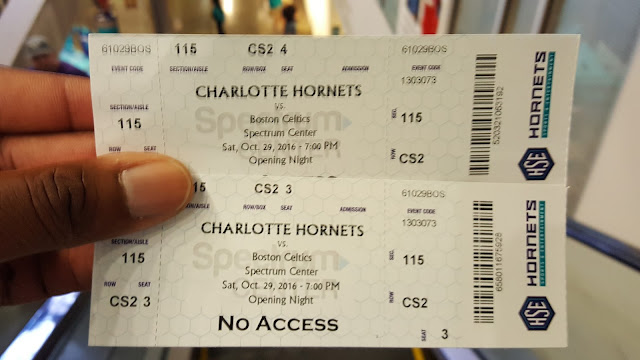 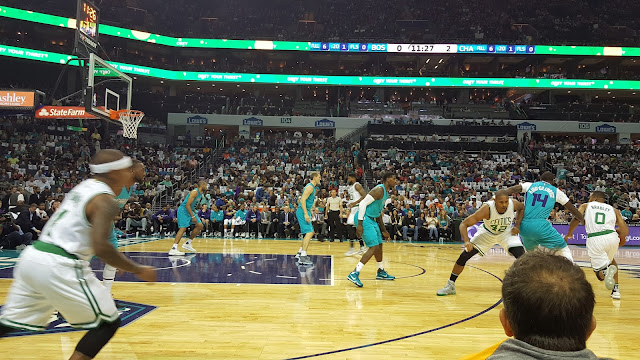 I'll report on other benefits that come from being a season ticket holder in the future.

Another season ticket holder perk. I received an email that gave me access to two free tickets in the nose bleeds for an upcoming game. 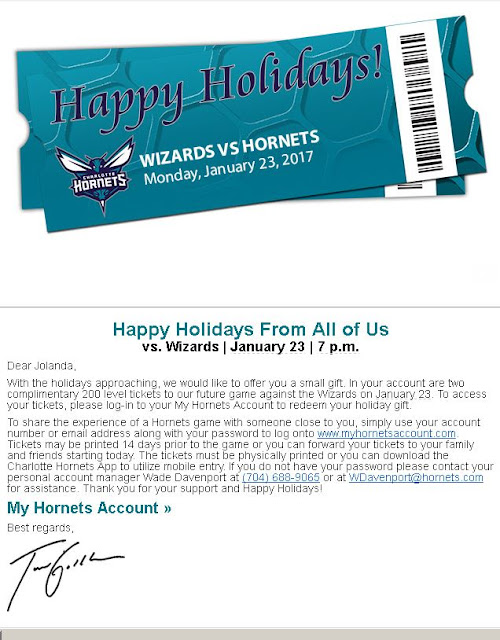 I gave the seats away to a friend / co-worker of mine who was very glad to get them. 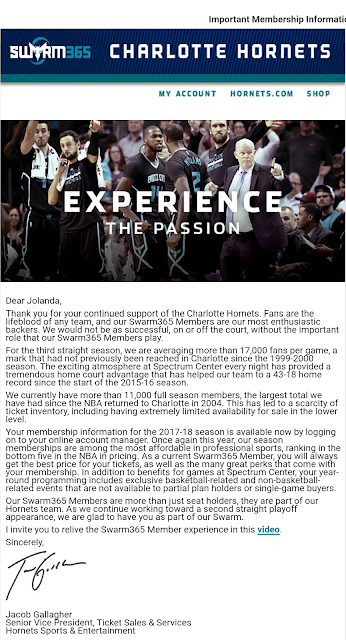 I averaged selling the nights we didn't go for $140.46 when I paid $200. The actual cost of the season was $3730 for 8 of the biggest games of the season. I got lots of benefits like I was behind the visitor’s bench, I was in the same seats every game, I received in seat service up to the start of the game, I had access to the Front Court Club and I was steps away from bathrooms and refreshments in the sections 104-105-106 Private North Club lounge and my wife and I love the whole experience.

UPDATE
1/22/2017
After talking to my Hornets Account Manager, really thinking about how much I ended up paying after I sold the nights we didn't go and really thinking about all the fun my wife and I have at the games I'm renewing and I might be looking for a season partner that would share in the payments with me. A season partner might be hard to find because my wife and I go to the games on holidays and when the NBA stars come to town. Oh well if we can't find a partner then I'll be selling seats again. Selling seats is not fun and you have to be disciplined to do it right but it works.
We are renewing our season seats 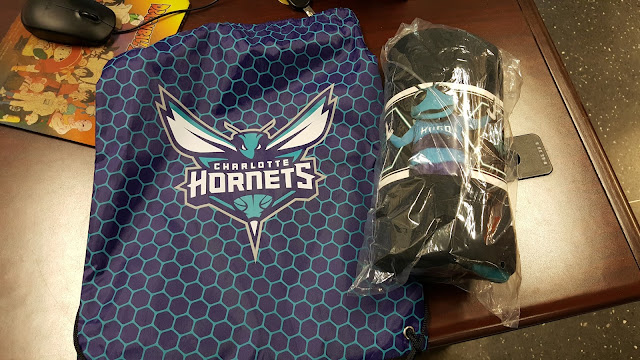 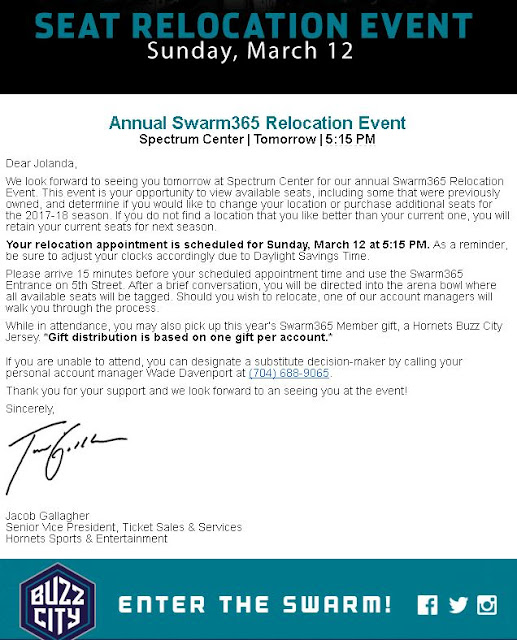 My wife and I are staying in our seats next season and we live so far away that we did not attend. The season ticket holders that did attend got free Buzz City Jerseys. 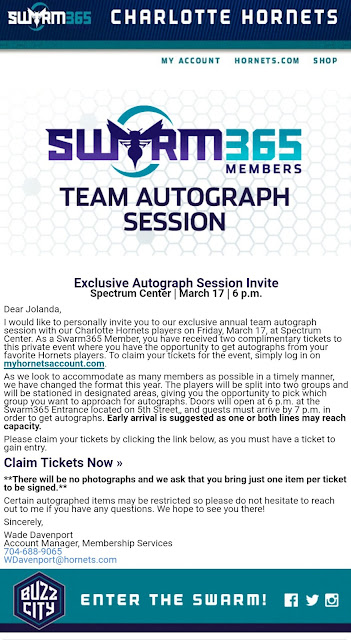 I received two tickets to the autograph session that I gave away because my wife and I were not going to be able to attend. 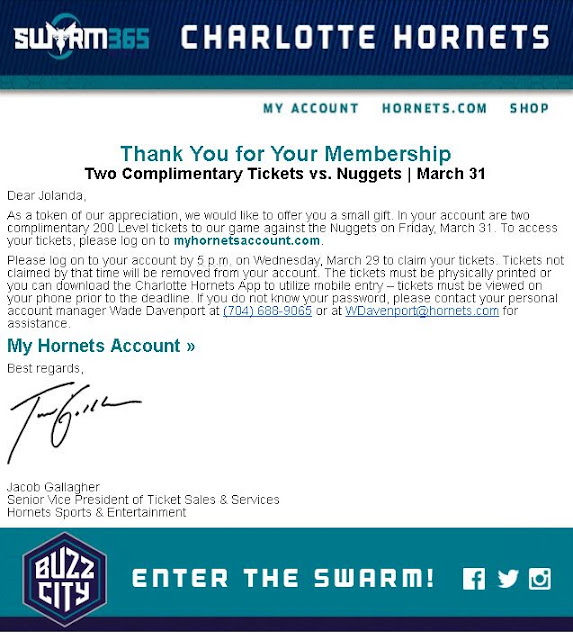 They gave me 2 free nose bleed seats and I gave them away to one of my co-workers. 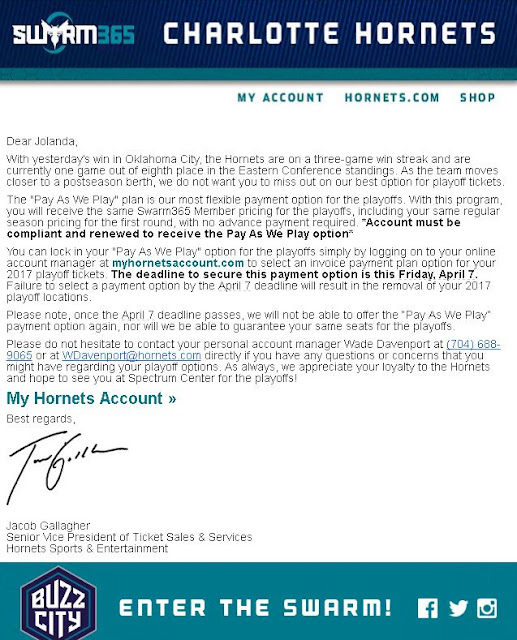 After getting this email I went to my account page and opted in for the pay as we play if we get into the playoffs. 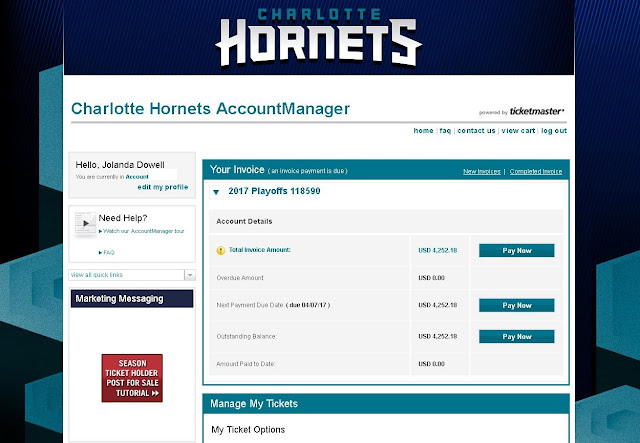 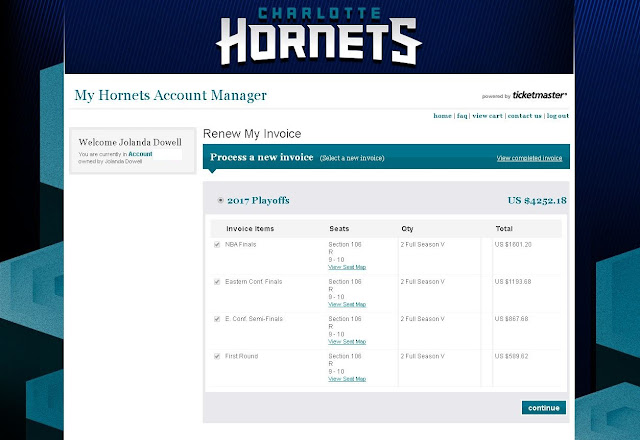 This screen shows how much money you will have to pay / owe for each round of the playoffs. 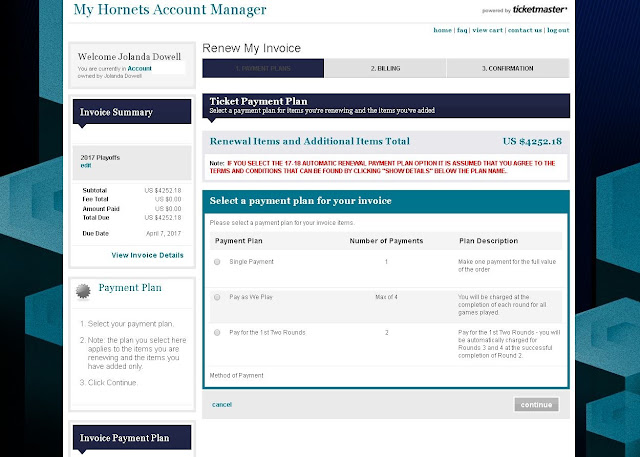 This screen shows the different options that are available for season ticket holders.

After reading at the bottom of the last home game email that season ticket holders should stop by Swarm365 Headquarter and pickup a Swarm365 member gift. The wife and I weren't going to the game so I contacted our account manager and he was more than happy to ship the gift. Not bad far as giveaways go. 2016 Swarm365 Jersey. 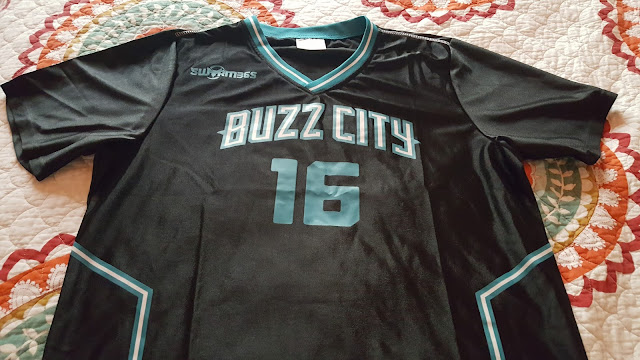 I used Shutterfly.com and made a 20X30 collage poster of all the games we went to during our 1st season as season ticket holders. 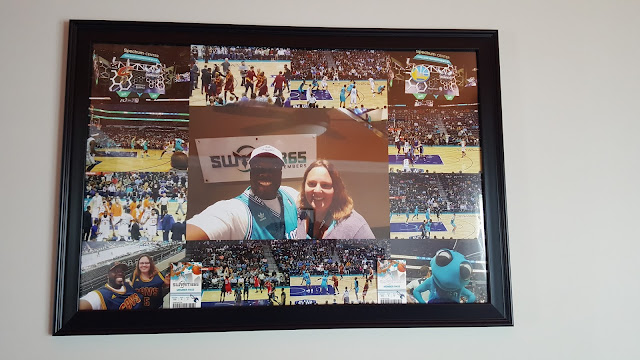 The Hornets 2016/2017 season is ending. This has been a great experience. I will be a season ticket holder for the upcoming 2017/2018 season and the 2018/2019 season I plan to drop my season membership and travel to a few of my favorite teams arenas (Cleveland Cavaliers *we already go every year*, San Antonio Spurs, and Toronto Raptors). I hope my guides help.

SEE THE VIEW FROM SEATS BEFORE YOU PURCHASE
This is a guide that can help you learn how to see pictures from arena seats before you send your money on seats.

Popular posts from this blog


(READ ABOUT MY OTHER SEASON EXPERIENCES) 2016/2017 SEASON TICKET HOLDERS GUIDE 2017/2018 PARTIAL SEASON TICKET HOLDERS GUIDE
This will be my 3rd season as a season ticket holder for the Charlotte Hornets and every season I learn a bit more and I share more with you the reader.
1/22/2018 - At this Point I'm still in the 2017/2018 season and I've renewed my seats.
I received a call and a letter from my account manager telling me about the upcoming 2018/2019 season.
I was given information about prices and the benefits for the 2018/2019 season

You will be able to select 23 games from the schedule *Opening Night plus any other 22 games*. How many games will you be going to?
The wife and I will be going to around 10 games for sure and possibly a few more.

How much will partial season tickets cost you?